The four of us (Hannah, Neil and we Turtles) arrived at the Pingyao Railway Station on Friday afternoon, after having slept on the train (the boys reported a good night’s sleep, the girls-not so much) and snacked our way through the morning, complete with Turkish coffee compliments of ElAl and cucumber flavored Lays potato chips, which we found quite refreshing and enjoyable. The moment we stepped off the train, it was obvious we had left the big city behind. Finding a taxi to take us to our guesthouse proved a challenge, so we wound up walking the 25 minutes into the old walled city and through the main street to the other side of town, fending off touts offering rides as we went. Exhausted from the trek in the afternoon heat, we cooled off in our stone-walled rooms at Jin Tai Sheng Inn ($24/night). Although the innkeeper didn’t speak a single word of English, Felix managed to check us in and communicate our needs. A classic example of Pingyao style, the inn was set in a traditional stone walled courtyard decorated with red lanterns, off of which were a dozen simply appointed rooms with traditional stone-platform Kang beds.

Pingyao is one of the quintessential old cities of China, and the small town vibe was pleasant. The narrow cobblestone streets and alleys were lined with shops, restaurants and the usual stalls of snacks and nicknacks. The old city walls are in place, and the towers at the gates and in the center of town were impressive, especially when lit up at night.

With the start of Shabbat approaching, we split up to accomplish a few tasks in preparation. Neil went off to purchase museum tickets (3-day prepaid passes for all the museums in town, $20 each), and the rest of us went to the supermarket to stock up on food and water to last the weekend. We picked up some bread, crackers, veggies, fruit, yogurt and a can of corn ($15). The noodles that the lady was selling from a small street cart looked good too, so we bought a bag ($1) to augment our purchase. Stocked with food for the coming days, we walked down the street until we found a restaurant where the pictures on the sign and wall looked good. We sat down for a late lunch/early dinner. Cold beers (bing pijo), noodles, eggplant, bok choy, dumplings and candied yams ($13 per couple) were just what we wanted. On a full stomach, we returned to the guesthouse to escape the heat, rest, and get ready for Shabbat. Showered, rested and relaxed, we began Shabbat together, sitting around the table in the courtyard. After kiddush, we snacked on cookies and fruit, sipped some tea, and hung out until it was time to hit the sack.

We awoke to another clear-skied, hot day. Before setting out, we had a relaxing breakfast of yogurt and muesli, and off we went to explore the old city and its museums. Our first stop was supposed to be the first bank – ever – but it was overloaded with a Chinese tour group, so we went next door to another bank turned museum. There we toured the courtyard and somehow managed, through the ridiculous English explanations, to learn about how banks came into being in the Qing Dynasty (17th century) in China. Then, we went next door to see the very first bank, which was remarkably similar, only far more crowded. Around a series of two or three courtyards were rooms, each serving a different function. Most of the rooms doubled as workplaces and dormitories, sporting classic kang beds. Some had cellars where money or other valuables were kept. In the back courtyard were rooms reserved for the manager or owner, as well as important guests, and were outfitted with elaborately carved wooden furniture and other artifacts.

By mid-afternoon the streets were full of people and we dodged the snorting, spitting and ill-mannered Chinese tourists as we perused shops and stalls. We found our way to the Confucius Temple and sought refuge in the quiet courtyards and shrines. It was hard for us to tell the difference between the various forms of worship, and the distinction between Confucianism and other Chinese faiths seemed to blur. The main exhibit explained the history of the Imperial Entrance Exam, another Chinese historical achievement, through which those with high academic skills were admitted into the imperial bureaucracy. The temples served as places of study and worship, as well as centers of Confusion studies, upon which the principals of government were based.

The museums and heat had tired us out, and we were ready for some lunch. We returned to the guesthouse where, with some assistance from the innkeeper, we prepared a feast of cold noodles, Israeli salad, corn, PB&J, fresh tomato flavored Lays potato chips, green tea ice cream flavor Oreos, and fruit. It was a nice and relaxing Shabbat lunch with good friends. Afterwards, we were all ready for a nice afternoon nap.

Rejuvenated, we set out to climb the city walls. Starting out at the North Gate, we walked along in a clockwise loop, looking out over the views of the city, inside and outside of the walls. Our two hour journey along the city walls was full of interesting conversation, laughs and a mystery flavored Mentos snack break. We climbed down near the South Gate and wandered around the alleys, stopping in a samurai sword shop where we saw some exquisite ancient pieces. Ready to be in the air conditioning, we went back to the hotel and relaxed while we snacked on some fresh fruit. 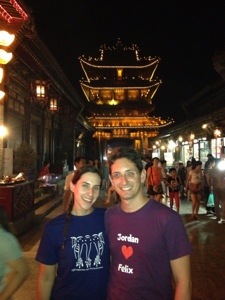 Later that evening after Shabbat, we set out in search of dinner and after nixing a few places, stumbled upon a hidden gem. Our delicious dinner featured wide rolled oat noodles with a tomato based sauce, cucumber with sea-buckthorn (a small orange berry), fried yam cake and the most incredible braised eggplant ($15 per couple). The surprisingly good food and the lovely stone courtyard setting made for what might be the best meal we’ve had in China. We took an after dinner stroll along the main drag and browsed in some shops along the way before finishing off the night with some ice cream ($1.50 each). Neil was particularly excited by his banana flavored ice cream pop.

Sunday morning started off at a cute coffee shop we had scoped out the day before with some much needed caffeine and breakfast. We each enjoyed a coffee ($5 each), some complimentary cookies and some yogurt and granola we brought ourselves. From there, we went to the Armored Guard Museum – after all, a city with so many banks needs some guards. The highlight was the interactive weapons display where we each picked up a scary spiky weapon with which to play. Felix and Neil shared a round of archery ($1.50) and the girls were impressed with the boys’ skills. We stopped for lunch in a nondescript restaurant on the main street where we had some noodles and stir fried veggies with rice ($5 per couple). Having walked by a teahouse on the main street multiple times, we were curious to check it out. There, we sampled three different kinds of tea which the attendant prepared and poured accordingly to the local custom. Each couple chose two or three varieties to bring home as souvenirs.

The only Taoist temple museum open to the public is in Pingyao so, of course, we had to go see it for ourselves. It was very quiet and tranquil and we hung out in the courtyard for a while. While it was interesting to see, after seeing so many temples, at the end of the day, a temple is just a temple to us.

By this point, we needed some pampering so went to get a massage which we had been missing since our last one back in the Philippines. It was the first and only one on Hannah and Neil’s trip. We bargained them down to $8 per person for an hour long foot massage. The massage was relaxing although the woman massaging Jordan’s feet would not stop talking loudly (and was incapable of multitasking, so Jordan felt her massage was more feet petting than anything else). Relaxed from the massage and the time spent in the air conditioning, we walked across the street to get some dinner. Hannah and Neil tried the Pingyao beef, which hey reported resembled corned beef, while we Turtles played it safe with tomato and egg and shared a noodle dish ($8).

It was getting late and we had a train to catch, so we we went back to our guesthouse where the innkeeper had arranged for transportation to the railway station ($5). We piled into what looked like a toy van – a little lacking in space – so Felix sat on the floor for the short ride and we arrived at the train station ten minutes before it was time to board the train. We settled right into our four person soft sleeper cabin ($40 per person for tickets originating a few stops earlier in Taiyuan, as that’s the only way to book this journey) and while Neil read a book, Hannah and the Turtles watched the movie, The Last Emperor – a Hollywood film about Pu Yi, the last emperor of China. By the time the film ended it was late and we needed to get some sleep before our train arrived in Xi’an, way too early the next morning.