On Tuesday afternoon, we made our way from the central train station to our hotel. We chose to stay in the central part of downtown Bangkok so we could easily access all there is to do there and to get a taste of a different part of town. Down then street from the Ramada, across from the Bangkok Palace Hotel and across the street from a cute boutique hotel was our hotel – small, three story walk up, no window, shared bathroom (Jordan has vetoed those going forward), and the hardest bed you can imagine (think stone- no exaggeration), but what do you expect for $24 a night? 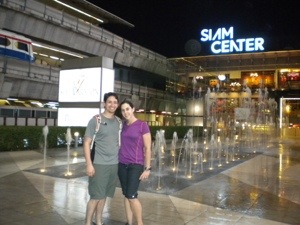 Bangkok is known for its massive malls, so of course, we had to see them. A sweaty 15 minute walk weaving through street carts full of clothes, electronics, food, trinkets, etc., led us to Central World. We didn’t go inside, but stopped to admire the two large shrines where the smell of incense accompanied people’s offerings to the deities. The street scene strongly resembled the strip in Las Vegas with its dirty sidewalks, sky-bridges over never ending traffic jams, flashing neons signs, gigantic hotels and malls, and larger than life icons of consumerism. Next door, a ten minute walk away, we entered the air conditioned bliss of Siam Paragon, an upscale multi-story mall with high end name brands that would put most most suburban American malls to shame. Tempted to revert to our western tastes, we managed to avoid Starbucks, Coffee Bean, and Cinnabon (really tempting). Instead, we explored the various local options which were beautifully presented and often gourmet versions of the foods we saw on the street.

After calming our pangs of hunger with some delicious vegetable dumplings (55 baht for 8 pieces), we headed to Gourmet Market (the Whole Foods of Thailand). For those of you who may not know, we love supermarkets. 🙂 There, we sampled anything within our dietary restrictions and boy, did we do well. It was a splendid assortment of Thai breads, cookies, cakes, dried fruit, a variety of rice cakes, sticky rice and banana granola, and candies. We also saw cheese for the first time since landing in Asia. Although, samples of cheese were not offered, it was comforting to see an old friend. Despite our best efforts to resist our temptations, we finally broke down and took a restrained walk through Uniqlo (Jordan’s weakness) before stopping at Krispy Kreme (Felix’s weakness) for a hot off-the- line original glazed doughnut (27 baht).

Wednesday morning we got off to a late start and headed over to Dusit, the neighborhood that is home to the royal family and government of Thailand. With our tickets from the Grand Palace valid for these museums as well, Felix was very excited to see Vimanmek, the Teak Mansion that was home to King Rama V, grandfather of the current king, Rama IX. The only thing was, not having checked in advance, we left the hotel without proper attire. Both in shorts and t-shirts, we were flatly turned down by the agent in the ticket booth, who unceremoniously pointed us toward a booth selling sarongs. Yes, men who weren’t wearing long pants and women who were not wearing long skirts were lined up to purchase sarongs for 50 baht. A deal hunter by nature, Felix immediately spotted a sarong-clad Frenchman, who was happy to sell him his used sarong (bought from the same booth an hour earlier) for only 20 baht! Jordan could not be persuaded to do the same, as she wanted a prettier sarong. So, off to the other side of the complex we went, where (on a tip from another tourist) prettier ones could be found. A bargain at only 100 baht, Jordan was pleased with her appearance, and we entered the mansion, both wearing our new clothes. Moral of the story – never leave home without your sarong!

We also visited the Ananta Throne Hall, where we viewed a well designed exhibit of local artistry commissioned by and for the King and Queen. We have never seen so much gold in one day, as well as intricate wood carvings, basket weaving, tapestries, and beetle-wing sequined (yes, from real beetle wings, but don’t worry, they all died a natural death) jewelry and other decorations.

In the evening, we were treated to a first-class experience that we shall not soon forget (thanks Noni & Bob for the introduction)! What a pleasure it was to dress up in nicer clothes, be picked up by a driver (Mr. Ball), and whisked off to a hidden gem. Tucked away in a back corner of Sukhumvit, hibiscus flowers lined the entrance to Na Aroon (Thai for “break of dawn”), a beautiful restaurant housed in a classic wood mansion, few of which remain so well preserved today. Offering Thai delicacies mostly of the vegetarian variety (we were very excited to finally be able to choose from so many options), it was truly a feast. Our hostess, Ms T., and her assistant, Ms N., were gracious and lovely. It was so interesting to learn about their culture, religion, and lifestyle and have such interesting and intellectual conversations. We shared stories, interests, and laughs over coconut waters and a delicious three course meal. As we reluctantly said goodbye, our hostess presented us with a thoughtful gift of scrumptious cookies for our journey to Cambodia the next morning, and also offered us a ride with Mr Ball to the bus station in the morning, which we gladly accepted and appreciated. Our time in Bangkok ended on a very high note.

One response to “Never leave home without your sarong”