The list of familiar products with an unfamiliar twist seems endless. Now that we’re more than two months into our trip, many of the things that required some getting used to at first are now as normal as ever: hot and humid days don’t phase us, Jordan likes the cool evenings (if you know her you know that she and cold don’t usually get along), the shoilet (shower + toilet room) is the norm, we can get a good night’s sleep on a rock-hard mattress, daily application of insect repellant is just part of the routine, we are accustomed to crossing the street despite oncoming traffic from all directions, and much more. On the flip-side, so many things that should be familiar seem quite strange: the Colgate toothpaste we purchased only had writing in ‘scribble’ on it (Khmer, Lao and Thai all have alphabets that derive from Sanskrit and look like scribble to us) and we were surprised to discover that instead of the familiar sweet mint flavor we were expecting, it tasted like salt. The international Walls/Good Humor/Strauss brand of ice cream has local flavors, such as Taro, Corn & Green Bean, Black Bean and Green Tea. Mentos come in cola flavor, which are surprisingly good. Oreos come in a few varieties, including the very strange Blueberry or Orange Ice Cream flavors. Potato chips (Lays, Pringles and the like) come in seaweed or seafood flavors. This week at Starbucks we sampled a Green Tea & Red Bean Frappuccino, which was a combination of lovely subtle sweetness with a mushy bean side dish that belongs on nachos, not in my cup. Every brand out there has a whitening line of cosmetic products, making it a challenge to find non-whitening versions. While the Westerners are sitting in tanning beds trying to get darker, over here everyone is doing all they can to get whiter. In short, we miss the comfort of what we think of as normal, but also appreciate that normal is so relative.

Now, onto our recent adventures:

In order to save ourselves a lot of time and a lot of money, we decided to cash in a few frequent flier miles (25,000 United miles for those of you who keep score) and fly from Vientiane, Laos to Chiang Rai, Thailand. The over land journey would have lasted 24 hours (and having recently done one of those journeys we weren’t keen to do another so soon), and by flying into Thailand we received a free 30-day visa (by land you only get 15 days) which saved us the need to pay for an extension. The flights on Thai Airways were quite comfortable, and we enjoyed our quirky Vegetarian Oriental meals, which consisted of tofu, veggies and mystery dessert. Felix was sure it was beans and noodles, while Jordan insisted it was chocolate and mango. Even the flight attendant couldn’t solve this one – the world will never know. Being a Star Alliance Gold member paid off big time and we thoroughly enjoyed the complimentary food, drink and wifi at the lounges in Vientiane and Bangkok. Throughout the day, we snacked on cheese and tuna sandwiches, fruit, cakes and other goodies.

Upon arrival in Chiang Rai on Tuesday evening, determined not to pay the inflated rates of the airport taxis, we followed the directions of the guy at the tourist information desk and began walking out to the intersection just outside the airport where regular meter taxis wait. This may or may not have anything to do with what happened next, but Jordan was moving slowly and limping a little due to a painful blister on the sole of her foot. About 2/3 of the way down the airport access road, a friendly local Thai woman stopped her pickup truck and offered us a ride into town. While definitely out of the ordinary, this seemed perfectly normal to us, so we hopped in the back of the truck (no, not in the cab, in the bed of the truck) and off we sped for the 15 minute drive into town. She dropped us off about a block away from our guesthouse and wished us a nice time in Chiang Rai. We, in turn, promised her that we would do a good deed for someone in the future and think of her. Tired from a day of travel, eating and “lotionizing” at the duty free, we checked into our room at Moon House @ Clock Tower ($21/night) and didn’t leave until the next morning. The room was actually very comfortable and it’s the only place we’ve stayed that had a comforter on the bed!

Wednesday morning began with a visit to the local coffee shop. There, we enjoyed some good coffee ($3) and two chocolate cookies courtesy of the choking on the rubber band incident. From there we continued to the Hill Tribe Museum ($1.66 each), where we leaned about the hill tribes (this was our third such museum in as many countries, and by now, we have a good handle on this topic), but here, we learned about opium, its origins, various applications for its use, the drug trade, and the tremendous influence it has had on the world. Don’t worry, there were no free samples.

With the rest of the afternoon ahead of us and not much else to do, we wandered around hoping to book a tour for the next day. As we left the first travel agent’s office, it began to drizzle. We walked around the center of town a little more, ducking into some shops (Jordan had a great time at Boots pharmacy) and tour agents. Finally, it began to rain and we headed back to our guesthouse just in time to avoid the afternoon downpour. We enjoyed hearing and seeing the quintessentially Asian clock tower, which was visible from our room’s balcony. About the height of a 2-story building and situated in the center of a roundabout, this bright gold colored piece of art is full of classic Thai motifs: spikes, dragons and a lotus suspended in the center. And here’s the kicker – at 7,8 and 9pm every night the whole thing lights up in changing neon colors and blasts music which can be heard throughout the neighborhood.

Once the sky cleared up, we ventured out to the night market. A fairly organized operation, it caters to locals too, but is mainly supported by the tourists who come in large numbers every night. The food stalls are in two rows of permanent shops and folding tables and chairs fill the square in the center. In the front is a cement stage, where nightly cultural performances take place – song and dance, often by young Thais in traditional garb. We collected some papaya salad ($1.33), pad thai ($1), and sushi ($2 – Felix had a tuna hand roll, Jordan had a salmon and a seaweed nigiri) and sat down to eat. The sushi proved to be a big hit and we went back for seconds ($1.66 for a Chiang Rai roll). It turned out that the sushi chef had worked in a Tel Aviv sushi restaurant for 5 years before moving to Chiang Rai to open his own business, and he was excited to meet us. We were really excited about his cheap, high-quality and delicious sushi and vowed we would be back the next day. For dessert, we had some Walls ice cream bars (see above, $1) – a great end to our night. 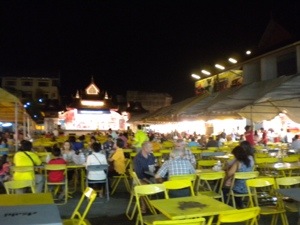 After our morning coffee ($3.30) and more chocolate cookies, we ready to start our day. Having been unsuccessful in booking a tour for Thursday, we decided to do a DIY tour and went with the most efficient option – a motorbike (sorry mom). We rented a motorbike for the day ($6.60 + $1.60 for gas) and after Felix got a “refresher course”, we were off. Definitely scared as this was his first time ever driving a bike and worried about the precious cargo holding onto his waist, we practiced on the quiet streets of Chiang Rai before driving the 20 minute journey south to the White Temple. 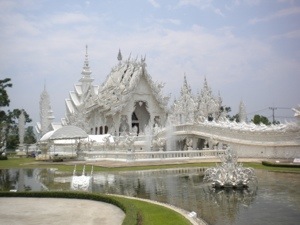 The White Temple (officially called Wat Rong Khun) is stunning – pristine white and sparkling in the sun, it looked like something out of a fairy tale. Construction on this active Buddhist temple began in 1996 and is an ongoing project for the artist, Chalermchai Kositpipat, who also designed the clock tower. He refuses to take any money from the government or corporations so that his work will not be influenced by anything. The main sanctuary houses a lifelike wax figure in a traditional meditation pose in front of a classic Buddha, but the fascinating and unique element is facing them on the back wall: an intricate mural which represents the evils of the modern world. The central element is a huge demon and inside its eyes appear George W. Bush and Osama Bin Laden. Throughout the rest of mural are scattered images of modern society ranging from beer to cars, Elvis to Michael Jackson to Brittany Spears, Spider-Man to Star Wars to Superman to Batman. On our way out, we stopped by the Golden Toilets (this guy really is over the top) and then, sat at the cafe across the lane where we sipped a coconut and a fruit shake ($3.10).

At about 3pm, we hopped back on our motorbike and on the way back into town, decided to stop at the mega mall. It was a lovely sunny drive from the countryside back into town and along the way, we stopped by the bus station to buy a ticket for the next day. We arrived at the huge mall, parked the bike with all the other motorbikes and went inside to play. After walking around for about an hour, we noticed some commotion near the entrance doors. The sky had opened up and it was pouring buckets, hailing and insanely windy. Thunder and lightening filled the sky as leaves, branches and store signs were carried by the wind and we stood there in shock finding it difficult to believe that an hour ago, we were outside in sunny, blue skies while now, we were wondering how we were going to get home on our bike. With nothing else to do, we went on a snacks scavenger hunt (what else were you expecting?). We ate a pretzel from Auntie Anne’s ($1), a cheese naan from a bakery ($1), a large fries from McDonald’s ($1.60) and free samples from the local style food stalls. An hour later, the blue skies were back and roads were magically dry. We still don’t understand this, but we dried off the seat of the bike and headed to Chiang Rai Beach for the sunset. It’s not really a beach, but more of a park beside the river. Nevertheless, it was beautiful and filled with trees blooming with bright orange flowers.

We dropped off the motorbike and excitedly went back to see our friend, the sushi chef. We indulged in some more delicious sushi ($4.60) and some homemade coconut ice cream ($0.66) for dessert. Our time in Chiang Rai was coming to a close, but we were ready to move south to Chiang Mai. We were happy to be back in the familiarity of Thailand where the people are friendly, cold coconuts are readily available, and the brands…well, at least they look like home.

One response to “Cola Mentos, Colgate salt toothpaste, blueberry ice cream Oreos, and whitening Axe (and everything else)”